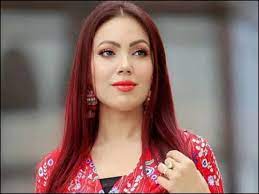 Has babita ji left tmkoc show ? Friends, let us tell you that in the last few times, we have seen that many of our favorite actors from Taarak Mehta Ka Ooltah Chasmaan TV show have left the show like Sailash Lodha and Raj Anankat, in this case, another actor who will play the role of Babita ji. That is, Munmun Dutta, so many people are asking whether she is also going to end the show because just a few days ago news came that she has got an injury, due to which she has to leave her foreign trip early.

She has returned to India but it was being told in many news media that she had met with a big accident, but friends, it was nothing like this, Munmum Dutta is hundred percent safe now because she did not appear in the show for many episodes. The question arose that has she also given up on the show, but friends, there is nothing like that and she is going to appear in the show very soon as before and we will again see the romance and comedy of Jethalal and Babita very soon. is going to get